This Budapest hotel is located directly in the heart of the historical city center, within walking distance of the city’s administrative, business and cultural districts as well as the famous shopping area of Váci Street. The building is also right next door to the majority of Budapest’s main cultural attractions; the Hungarian National Museum, the Dohany Synagogue (Europe’s largest) and St. Stephen’s Basilica – Budapest’s most famous Cathedral. Andrassy Avenue Budapest’s most elegant street is also only a 5 minute walk from the hotel. Of special interest and a must see attraction, Budapest’s most famous and grand spa center the Szechenyi Baths are only a 10 minute metro ride away. Ask at reception about how to get there. 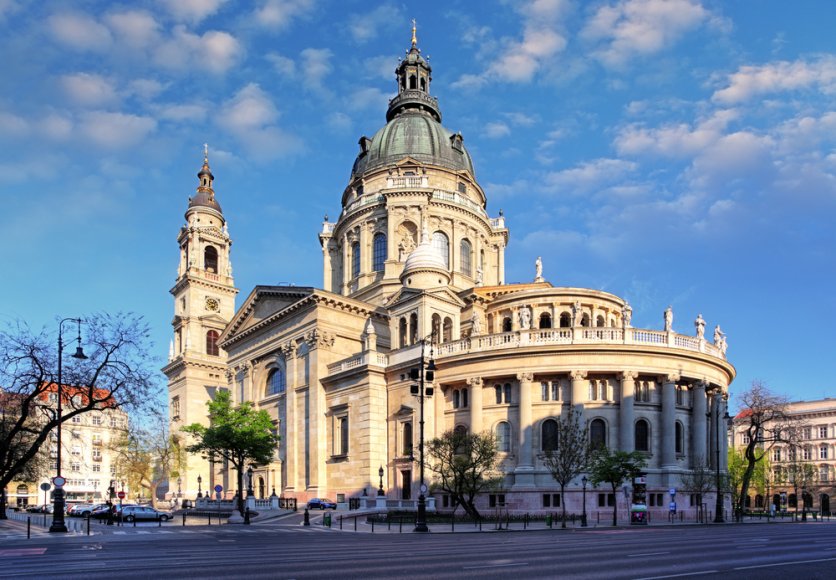 Budapest’s largest church, whose landmark dome can be seen from all over the city, was built in Classical style between 1851 and 1905. Inside is the Hungarians’ most revered relic – the mummified right hand of Hungary’s first monarch, King Saint Stephen. Among many famous works of art the statues of Alajos Stróbl are well worth studying, as is the painting by Gyula Benczúr depicting St. Stephen commending his country, by the offering up of his crown, to the patronage of the Virgin Mary. A grandiose cupola dominates the edifice offering visitors a good view of the city from its rim. From the unique 360-degree circular lookout you can admire Budapest from a height of 65 meters. A modern and secure elevator will take you most of the way up, from where you climb to the circular lookout on a spiral staircase. 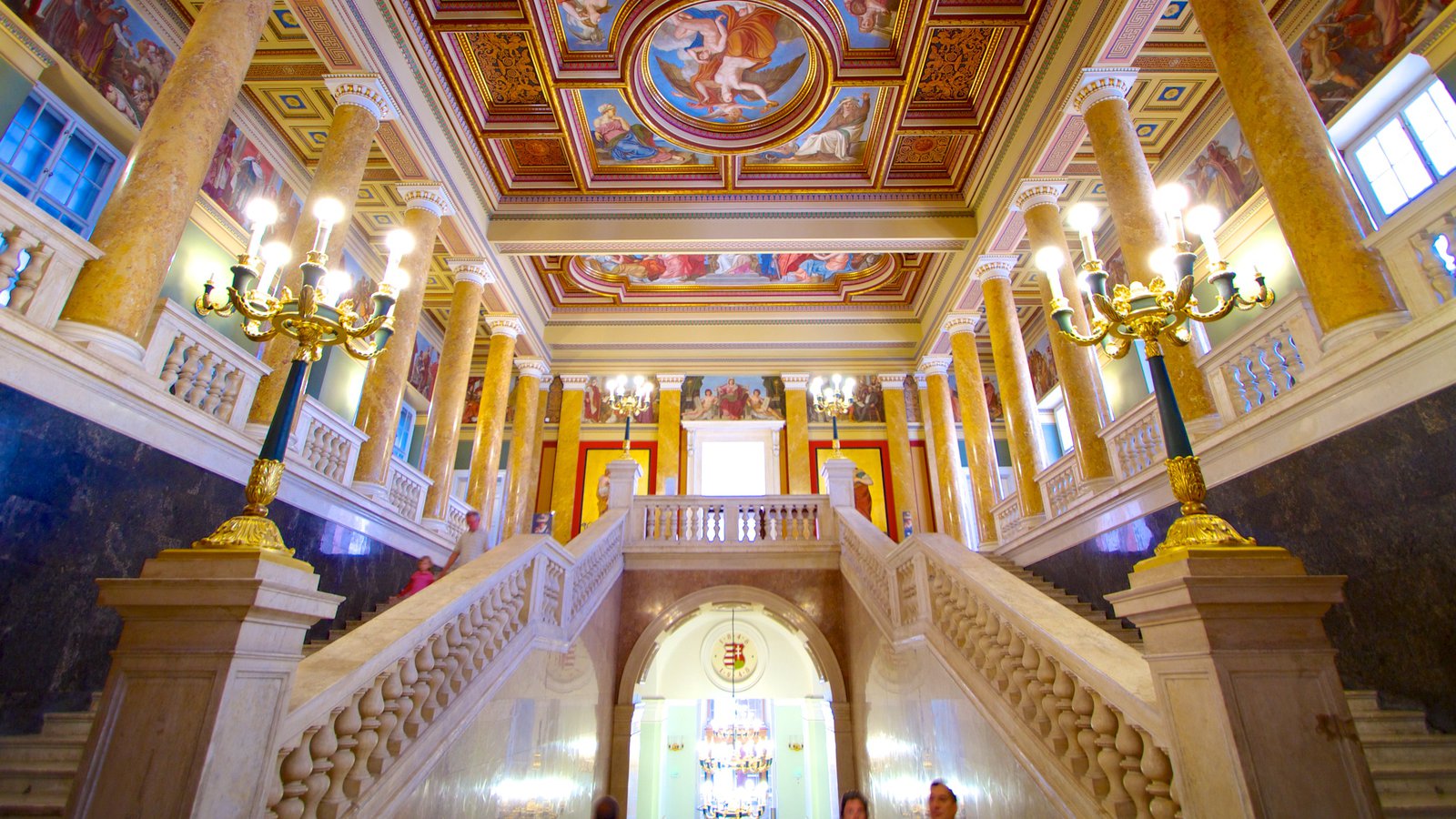 Hungarian National Museum: now responsible for the safe keeping of over a million objects, the National Museum traces its own history back to 1802 when it was founded with the medal, book and manuscript collection belonging to Count Ferenc Széchenyi. In 1846 it moved into the fine neo-Classical building designed by Mihály Pollack where it has been ever since. Permanent exhibitions: Hungarian History from the Founding of the State until 1990, Lapidarium – Roman Stonework, and Coronation Jewels and Robes.

The museum's architecture alone warrants a stop, but it also played a major role in Hungary's history: Petofi recited his famous 'national song' from the steps here in 1848; there is a plaque to commemorate this famous event. The inside of the museum is also stunning, with lavish use of marble and ceremonial architecture. The displays give a thorough account of the history of the Hungarian nation.

The last thousand years of Hungarian history are represented in the main exhibition, starting with such items as an ivory saddle and chain mail, and ending with political posters and a video of the Soviets leaving Hungary. On the first floor is displayed the Hungarian coronation mantle, made of faded silk and dating from 1031. 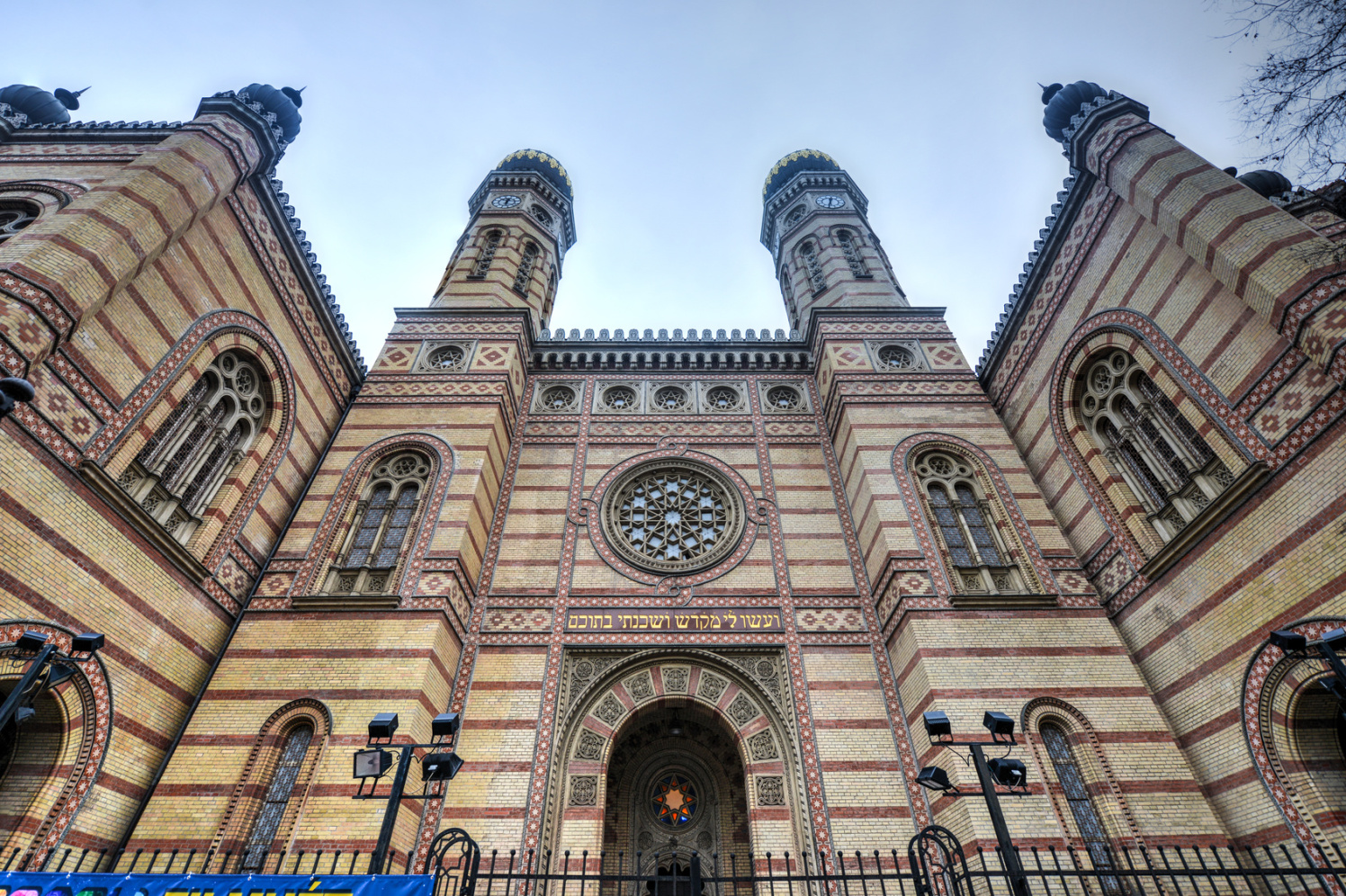 The Great Synagogue of Dohany Street

The Great Synagogue in Dohány Street, also known as the Dohány Synagogue, or the Tabac-Schul, the Yiddish translation of dohány (tobacco), after the Hungarian name of the street, is located in Belváros, the inner city of Pest, in the historical center of Budapest. It was built between 1854-1859 by the Neolog Jewish community of Pest according to the plans of the Viennese architect Ludwig Foerster. The synagogue neighbors a major Budapest thoroughfare expressing the optimism and the newly elevated status of the Hungarian Jews in the mid years of the 19th century. It is a monumental, magnificent synagogue, with a capacity of 2,964 seats (1,492 for men and 1,472 in the women's galleries) making it one of the largest in the world. The building has a length of more than 53 meters while its width has 26.5 meters. The design of the Dohány Street synagogue, while basically in a Moorish style, also features a mixture of Byzantine, Romantic, and Gothic elements. 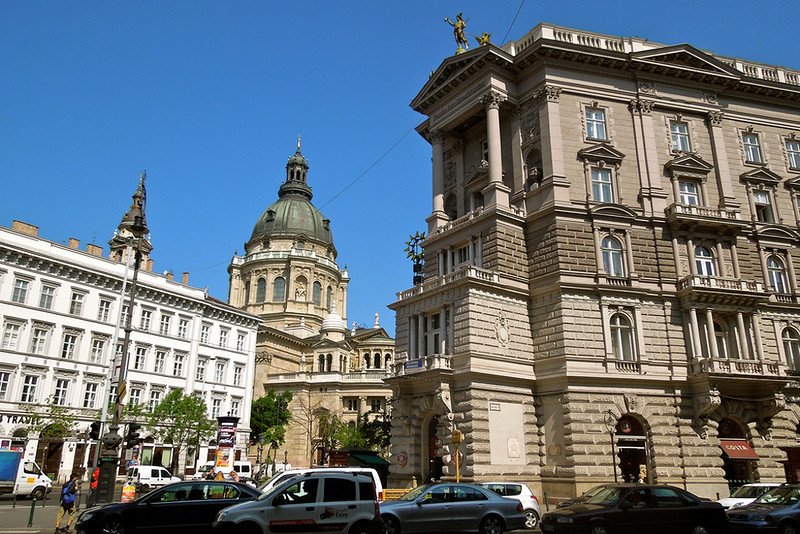 Andrassy Avenue is the most beautiful of Budapest’s streets. It connects Erzsébet tér with the City Park, ending at Hero’s Square. It is mostly flanked by Eclectic-Neo-renaissance palaces with fine facades, staircases and interiors, and it is part of the World Heritage. 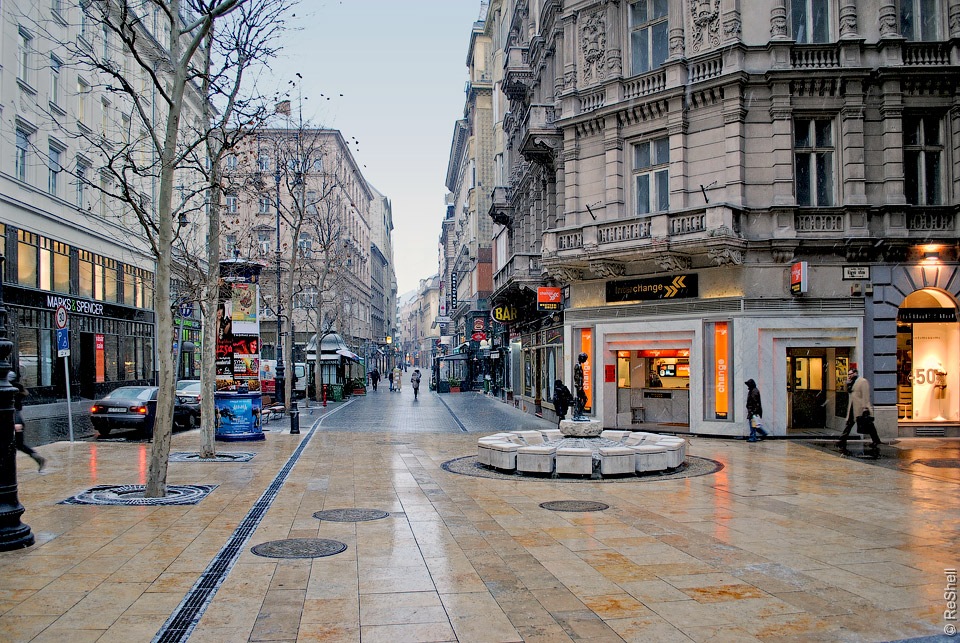 Váci utca (Váci street) is one of the main pedestrian thoroughfares and perhaps the most famous street of central Budapest. It features a large number of restaurants and fashion outlets catering primarily to the tourist market 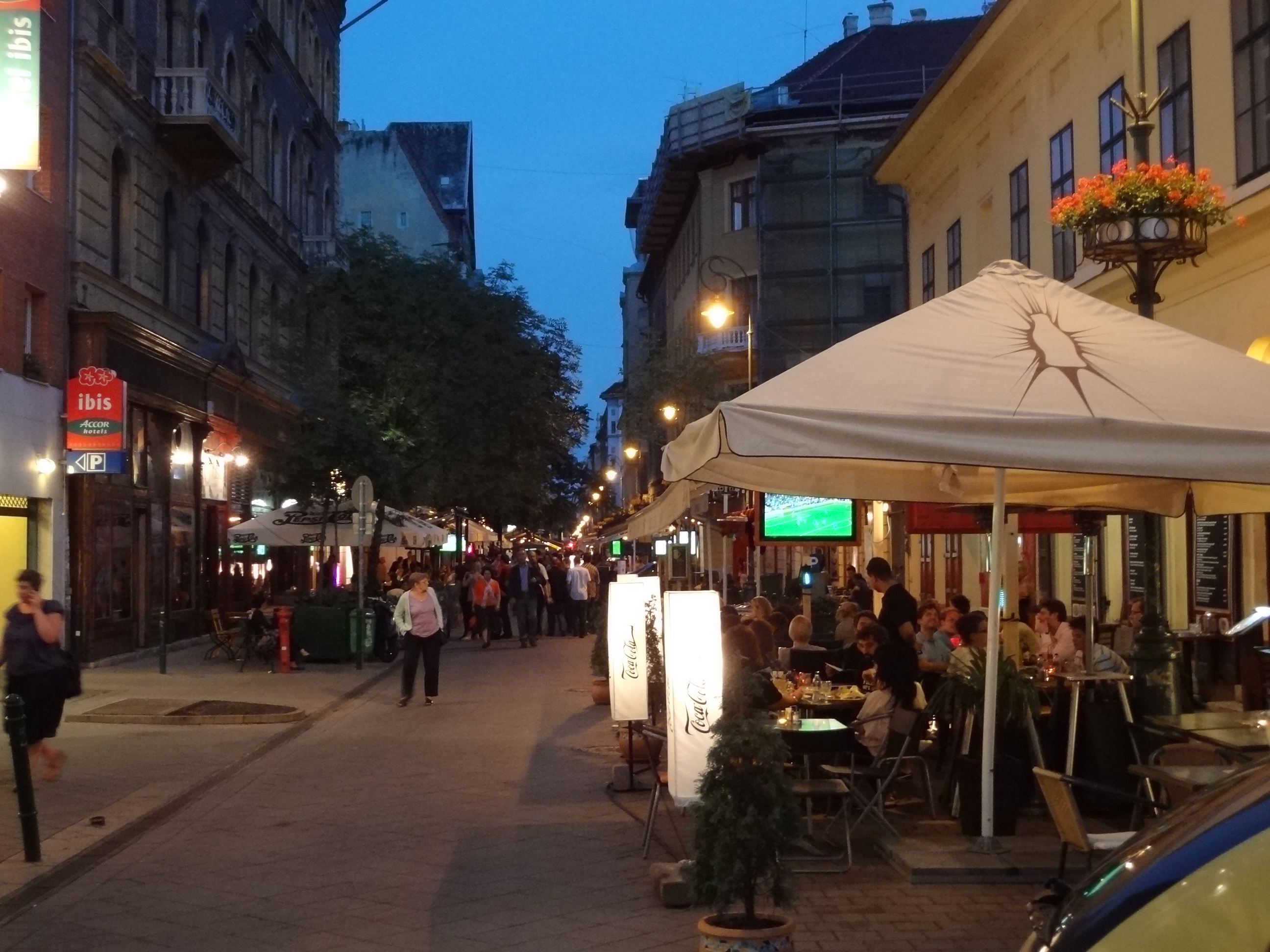 Ráday utca is also only a 10 minute walk from the hotel. Raday is a pedestrian street famous throughout Europe for its nightlife. The street is lined with bars, restaurants, nightclubs and intimate little cafés that appeal particularly to young people. Most are open until one or two in the morning. 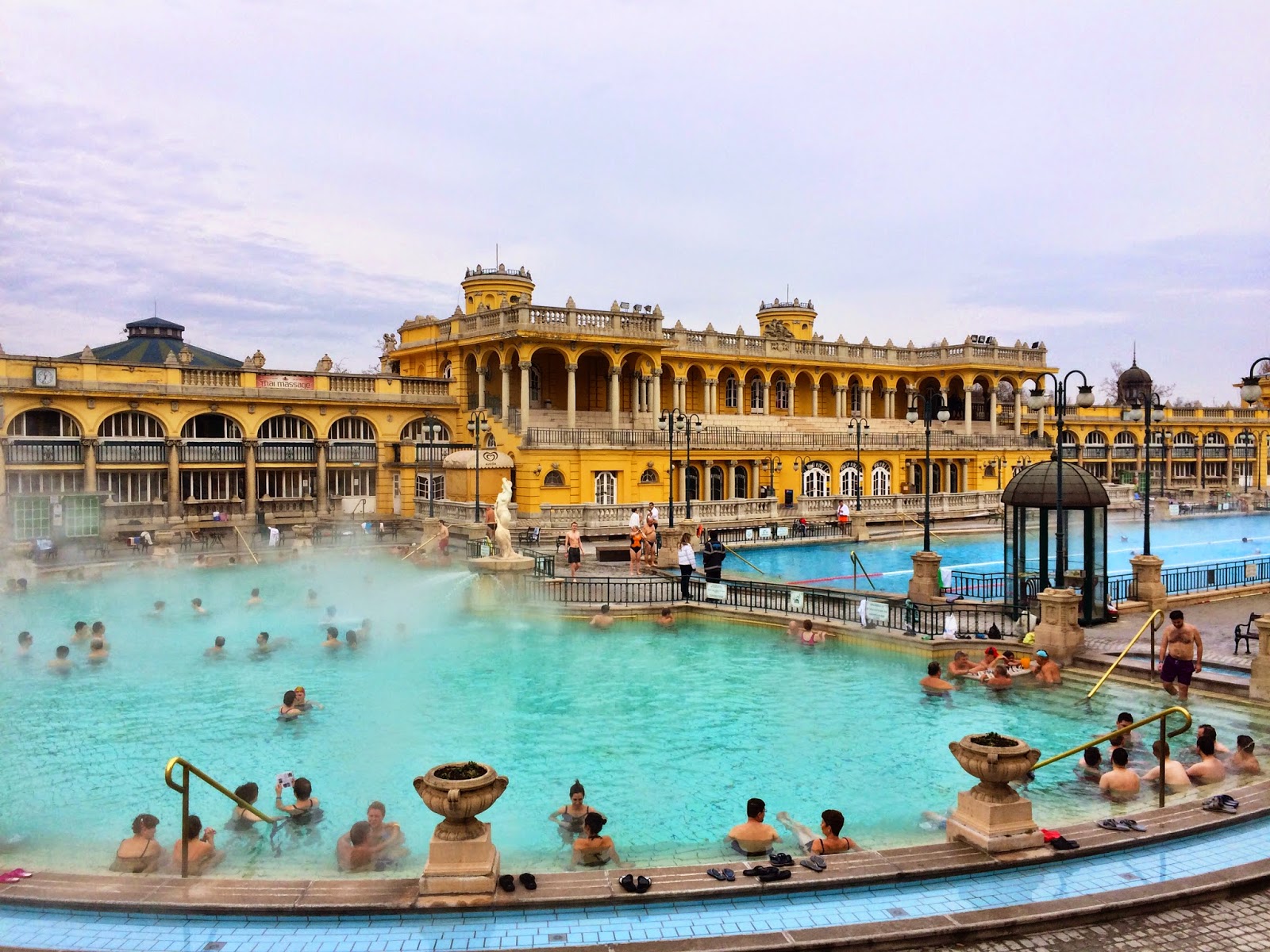 The Széchenyi Baths are one of the largest bathing complexes in all Europe, and the only “old” medicinal baths to be found in the Pest side of the city. The indoor medicinal baths date from 1913 and the outdoor pools from 1927. There is an atmosphere of grandeur about the whole place with the bright, largest pools resembling aspects associated with Roman baths, the smaller bath tubs reminding one of the bathing culture of the Greeks, and the saunas and diving pools borrowed from traditions emanating in northern Europe. The three outdoor pools (one of which is a fun pool) are open all year, including winter. Indoors there are over ten separate pools, and a whole host of medical treatments is also available.

The building is located in one of the most convenient areas in Budapest in terms of public transportation.

The building is situated only a 1 minute walk from the Astoria metro station on the M2 Redline and only a 5 minute walk from both the Deák tér and Kálvin tér stations, both on the M3 Blueline.

Leave us a message and we will get in touch ASAP

We are located in the very heart of Budapest